Traction elevators often need to be modernized to improve performance, enhance safety, and to integrate more up-to-date technology. Upgrading critical parts of a traction elevator can make a world of difference for you and your elevator riders, while also potentially increasing the value of your building.

WHAT IS A TRACTION ELEVATOR?

Whether geared or gearless, Stanley Elevator can modernize any make or model of traction elevator equipment. Our process includes a thorough field survey and inspection to assess the current condition of your equipment. Then, our technicians will make the best recommendations on whether it’s necessary for you to recondition, retain, or replace specific parts of your traction elevator.

MODERNIZATION ASSESSMENT: THE PARTS OF A TRACTION ELEVATOR

When making modernization recommendations for traction elevators, the following parts and components are assessed by our technicians:

On gearless machines, the hoist ropes pass over a traction drive sheave, which is integral with the armature. The DC version of the gearless machines is very robust and has been in operation for more than 100 years. When properly maintained, they can last for many years and replacement is usually only warranted when parts obsolescence is a threat to continued use.

When considering a modernization, we commonly retain these machines and refurbish them in place. Refurbishments can include:

The hoist motor is located on a geared or winding drum elevator. It couples with the brake drum and operates the spiral worm gear that meshes with the machine’s ring gear that turns the elevator drive sheave.

Prior to the late 1980s, these motors were DC for elevators traveling over 200 feet per minute and were primarily AC on the slower elevators. DC power provided a smoother and more controllable elevator at higher speeds. Since the late 1980s, advances in the use of AC Permanent Magnet Variable Voltage, Variable Frequency (VVVF) drives has made AC more controllable at higher speeds, so most geared elevators installed today now have AC hoist motors.

When considering traction elevator modernization, the hoist motor for both AC and DC is typically replaced with a modern AC motor and its related new AC VVVF drive.

These generators have carbon brushes which dust heavily in the machine room, causing a considerable maintenance issue. Now, with the introduction of AC PM and VVVF motor controls, the generator is no longer needed and is rarely ever retained when modernizing. The existence of the M-G set is actually a primary reason to consider traction elevator modernization since parts are becoming obsolete and harder to obtain.

A buffer is a device designed to stop a descending car or counterweight beyond its normal limit, and to soften the force with which the elevator runs into the pit during an emergency.

A spring buffer is one type of buffer most commonly found on hydraulic elevators or used for elevators with speeds less than 200 feet per minute. These devices are used to cushion the elevator and are almost always located in the elevator pit.

An oil buffer is another type of buffer that is more commonly found on traction elevators with speeds higher than 200 feet per minute. This type of buffer uses a combination of oil and springs to cushion a descending car or counterweight and is most commonly located in the elevator pit. Because of their location in the pit, buffers have a tendency to be exposed to water and flooding.

These parts require routine cleaning and painting to assure they maintain their proper performance specifications. Oil buffers also need their oil checked and changed if exposed to flooding.

When planning a traction elevator modernization, we will assess the type and condition of your buffers and recommend repair or replacement if required.

Guide shoes are devices mounted on the top and bottom of the elevator sling which slides or rolls on the rails to guide the elevator through the hoistway. They are equipped with rollers, liners, and tension springs which are subject to wear and tear. Some older style guide shoes require a poured lead Babbitt shoe, rather than a replacement nylon or neoprene liner.

If guides are not maintained or adjusted properly, your elevator will tend to rock, sway, squeak, or even rumble its way through the hoistway. We will assess your guide type and condition and recommend repair or replacement as required. The safety is a device on the car or counterweight that will stop the car or counterweight and keep the elevator from falling in case of overspeed, free-fall, or rope stretch. When considering a modernization, in most cases the safeties can be reused. We normally recommend cleaning and adjusting them. In cases of very old elevators, there are instances where the existing safeties can’t be reused as they are outdated and parts are obsolete. The brake is a spring-loaded clamping device that prevents the elevator from moving when the car is at rest and no power is applied to the hoistway motor. When considering a modernization and the hoist machine warrants retention, the brake type and condition should be assessed for refurbishment.

Refurbishment normally includes a new coil, pins, core, sleeve, pads, and springs, and thorough cleaning, painting, and testing. If it doesn’t warrant retention, a new replacement brake can be added to the existing machine. Resurfacing or replacement of the drum can be required also. If a new machine is being installed, it’s most cost effective to purchase a new brake as part of the new machine assembly which is installed and tested at the factory prior to delivery. In recent years, safety codes have introduced a need for protection against injuries caused by elevator cars leaving the floor with the doors open and overspeeding in the up direction. The rope brake is a device used to grab elevator suspension ropes to stop the elevator in the event of a mechanical or electrical failure. It activates if an ascending elevator overspeeds in the up direction and also if the elevator leaves the floor with the doors opened.

Though not required in all locations, it’s common to consider adding a rope brake device when modernizing your elevators. Special fit considerations are required before a brake can be added to an existing machine. We will assess conditions and advise you on the feasibility of adding a rope brake as part of our traction elevator modernization survey.

The sling is the basic frame which consists of two stiles, a crosshead, and a bolster or safety plank which supports the platform and cab of an elevator. The platform or floor of the elevator is placed in the sling and supported by brace rods in each corner, on which passengers stand or the load is carried. 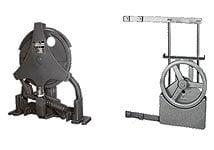 The overspeed governor is a speed monitoring device on cable-equipped elevators that triggers the safety when the elevator overspeeds. When planning a traction elevator modernization, these devices can be retained as long as they are properly equipped to meet current code requirements. Should they not comply with current code requirements, replacement will be necessary.

The governor rope tension sheave is required to keep proper tension on the governor cable during operation of the elevator. When planning to modernize your traction elevator, this device can normally be retained unless conditions exist that require its replacement. We will include an inspection of your governor tension sheave assembly when we assess your equipment for a modernization. A counterweight is added weight on traction elevators that counterbalances the weight of an elevator car, plus approximately 40% of the capacity load. These assure a more balanced load and help maintain proper traction for the elevator while under varying loads.

If there isn’t enough space left to add filler weights to accommodate the added weight needed, replacement of the counterweight frame may be required. Final determination of this requirement is often not made until engineering and final approval drawings are complete.

If you’re planning on modernizing your traction elevators, our technicians can assess the type and condition of your equipment and recommend any repairs or elevator replacement parts. Contact us to schedule a time for our team to evaluate your equipment.